John ARNOLD was Secretary of the Hong Kong, Canton and Macao Steamboat Company Limited, retiring in 1931 to Canada. He was born in Hong Kong on 5 April 1880, his father was Thomas Arnold (who had also worked at the Hong Kong, Canton and Macao Steamboat Co.) and his mother, Assing, a  Eurasian woman. John Arnold’s photographs were published in guidebooks such as A Pictorial Handbook to Canton (1905), In and Around Canton (1910), A Handbook to Canton, Macao and the West River (1910), Picturesque Hong Kong: a Handbook for Travellers (1911), Through Hong Kong with a Camera (1916), A Day in Macao with a Camera, Souvenir de Macau. Source: Gwulo. 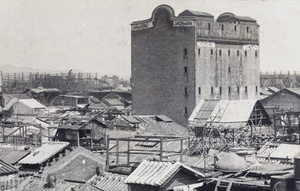