Lucy Monroe CALHOUN (1865-1950), who was the sister of poet and editor Harriet Monroe, was born in 1865. Before her marriage to William J. Calhoun in 1904, she had been a freelance art critic for Chicago newspapers as well as national publications. When her husband served as U.S. minister to China (1909-1913), she became the social leader of the diplomatic community in Peking. After her husband’s death in 1916, Lucy Calhoun served in the war effort in France in World War I. In the 1920’s she returned to Beijing, established her home in an ancient temple, collected art, and become an “institution” in the city. She remained in Beijing until the Japanese occupation of the city in 1937. Lucy Monroe Calhoun died in Chicago in 1950, aged 85. See https://blogs.library.duke.edu/rubenstein/2016/06/27/far-away-lucy-monroe-calhoun-family-photographs-china/. 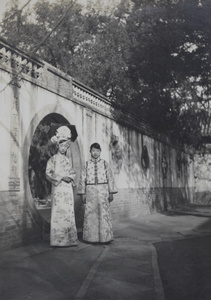 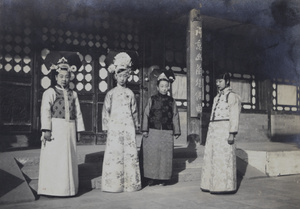