D. SATOW was a Shanghai-based portrait, landscape and general photographer.  He had a commercial studio at P.469 Nanking Road, Shanghai (near the Horse Bazaar), also at another time, a studio at 347 Nanking Road.  He photographed the Shanghai Amateur Circus, for an album, in c.1901. Forty-four of his images of the sights of Shanghai were published in Souvenir of Shanghai, in c.1903. Charles Darwent mentions that Mr D. Satow took some of the photographs in Darwent’s Shanghai guidebook Shanghai: a handbook for travellers and residents to the chief objects of interest in and around the foreign settlement and native city (c.1904).  Images of Shanghai by Satow were also published as post cards. See DH-s180 (the back of a cabinet card photograph by D. Satow).

Portrait of Constance Henderson and a Chow-Chow (鬆獅犬), Shanghai 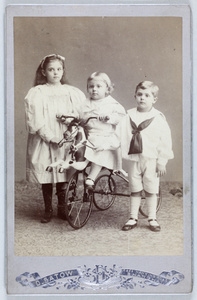