The photographer Michel A. BERTHAUD (1845-1912) was born on 10 November 1845 in Vienna, Austria. He was an associate of Étienne Prosper Berne-Bellecour from 1867 to 1870 and succeeded him at the end of the 1890s. Berthaud had a studio in Paris, France at 9 Rue Cadet (trading under the name ‘Helios’) and later at 31 Rue Bellefond. The business had numerous provincial branches including in Abbeville, Amiens, Boulogne-sur-Mer, Chartres, Dreux, Evreux, Louviers and Troyes. Berthaud became a member of the French Society of Photography in 1873. 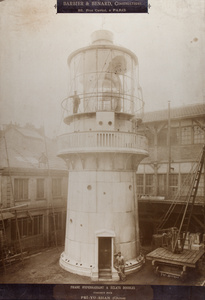 Beiyushan lighthouse made in Paris by Barbier and Bénard, c.1894