Lucy Elizabeth Harris (1873-1962), an English Quaker doctor, was born on 16 June 1873, in Tottenham Green, London, England. She was educated at Bradford Grammar School and qualified as a doctor at the Royal Free Hospital in London in 1899. In the autumn of 1899, Dr Lucy Harris went out to China for the Friends’ Foreign Mission Association (known later as the Friends’ Service Council) and established a hospital at Tungchwan (now Santai) near Chengtu, Szechwan (Chengdu, Sichuan). Dr Harris was a medical missionary in West China for 45 years, finally returning to England in July 1945. After retiring to Letchworth, Hertfordshire, England, she wrote 'Called to Heal and Help', which was published in 1948. Lucy Harris died on 29 October 1962. See also the Edward Sewell Harris papers (TEMP MSS 363) in the Library of the Society of Friends, Euston Road, London. Three images. HPC ref: LH-s. 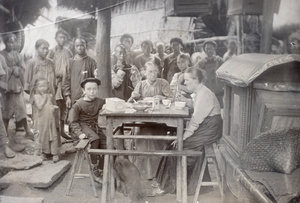 Dr Lucy Harris and two others having a wayside meal, on the way to Santai, Sichuan 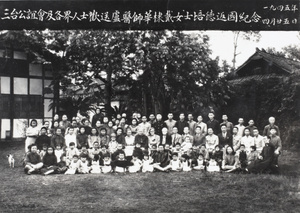